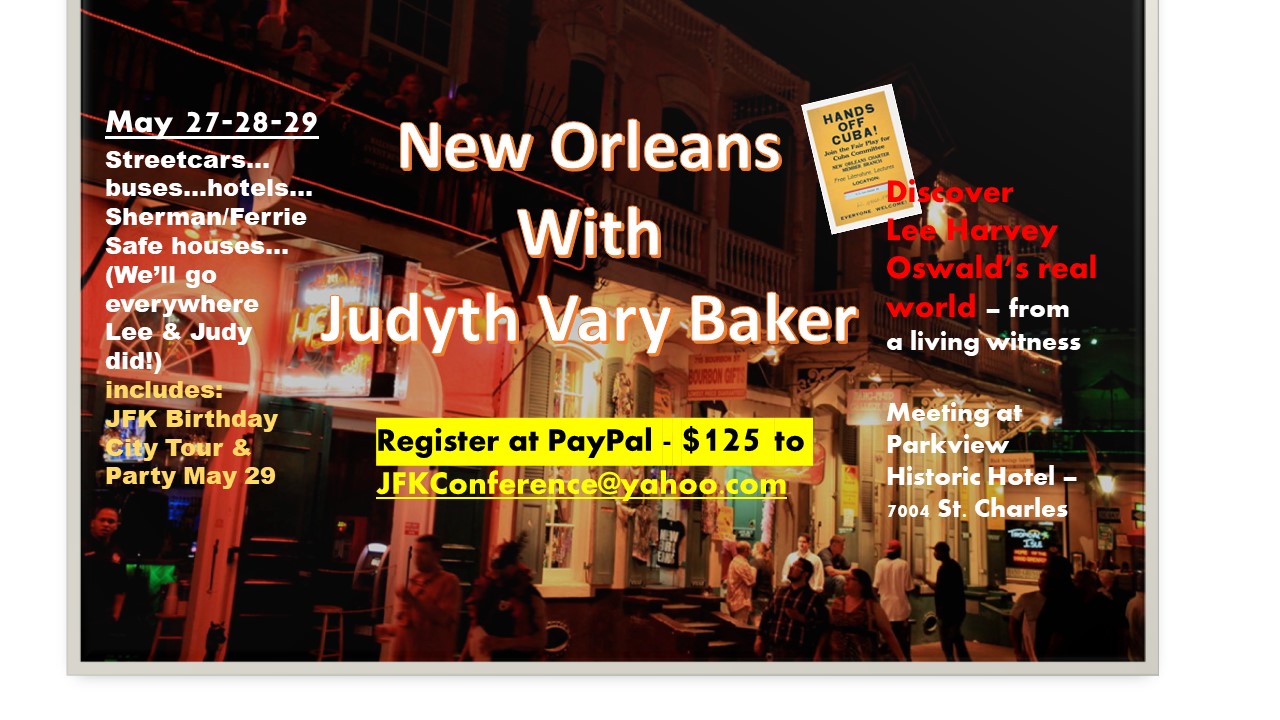 Why This Conference Will Make History!

Why This Conference Is Important

This conference is possible because “together,” says founder Judyth Baker, “we have many volunteers from many walks of life, working together, to bring forth new evidence, new material, and new and old witnesses who are protected so they feel safe enough to tell the whole truth.”

Jackie Kennedy’s Secret Service bodyguard Clint Hill, who jumped on the death car, was the first person, along with Jackie, to see the back of Kennedy’s head after he was shot. For decades, Hill showed reporters the location of JFK’s fatal head wound at the back of the head, meaning the kill shot came from the front. He was filmed and photographed doing so many times. But in 2013, with two new books and under pressure from every side to change his story, Hill finally gave in. He changed his story, to support the “official version” that JFK was shot from behind (Oswald was located in a building behind the car).

After decades of showing the location of JFK’s massive head wound at the back of the head, in 2013 Secret Service Agent Clint Hill changed his story under media pressure. The JFK Assassination Conference exposes such changes and helps protect and preserve true history. “At our conference,” Baker says, “witnesses find their honesty welcomed, protected and recorded for posterity.”

Records to Be Released

In 2021, the conference will bring in IMPORTANT TRIAL LAWYERS, TO LOOK AT THE EVIDENCE AND QUESTION LIVING WITNESSES, AS WELL AS TO ASSESS THOSE WHO HAVE PASSED ON, VIA THEIR FILMED STATEMENTS AND KNOWLEDGE ABOUT THEM FROM VARIOUS SOURCES. EVIDENCE WILL BE FACT- CHECKED AS TO WHETHER IT WOULD BE ADMISSIBLE IN COURT.

“What would have happened if Lee Oswald’s case had gone to trial?” Baker asks.  “Our LAWYERS, Baker says, “will review evidence, hear witnesses and be exposed to facts the Warren Commission never saw or heard. The Commission’s hasty and shallow investigation also ignored or didn’t know about the witnesses who have been speaking at our conferences. While they are still alive, their testimonies need to be heard and recorded.  We plan to have investigators, authors and experts in forensic science to also take the stand.”

Conspicuously absent will be Marina Oswald, the accused assassin’s surviving widow. “Had Oswald lived to be questioned by a Grand Jury,” Baker tells us, “his wife, Marina, would not have been allowed to testify. In 2013, Marina told the UK’s Daily Mail that she was refusing interviews because she was afraid the Secret Service would kill her. Imagine what pressure she was under in 1963!”

Baker points to recent news stories where the Russian-born widow, who at the time knew little English, revealed she was threatened with deportation if she did not ‘cooperate.’ “Her American-born baby would have been left behind in America, so Marina understandably told many lies,” Baker says. “One such story circulated was that she locked Oswald in their bathroom so he could not go shoot former Vice President Nixon. She had to change that story when it was pointed out that Nixon wasn’t in town at the time and that American bathrooms do not lock on the outside.”

We may have a knowledgeable person playing “Oswald” to standing in for the accused assassin, who was murdered in the presence of 77 Dallas police some 47 hours after his arrest. To the end, Oswald insisted that he was innocent, saying “I’m just a patsy!”

Hear and Meet the Witnesses and Notable Researchers

“Would Lee Harvey Oswald Have Gone to Trial?”

“The Fifth Amendment to the U.S. Constitution says a person suspected of a federal crime cannot be tried until a grand jury has determined that there is enough reason to charge the person.”