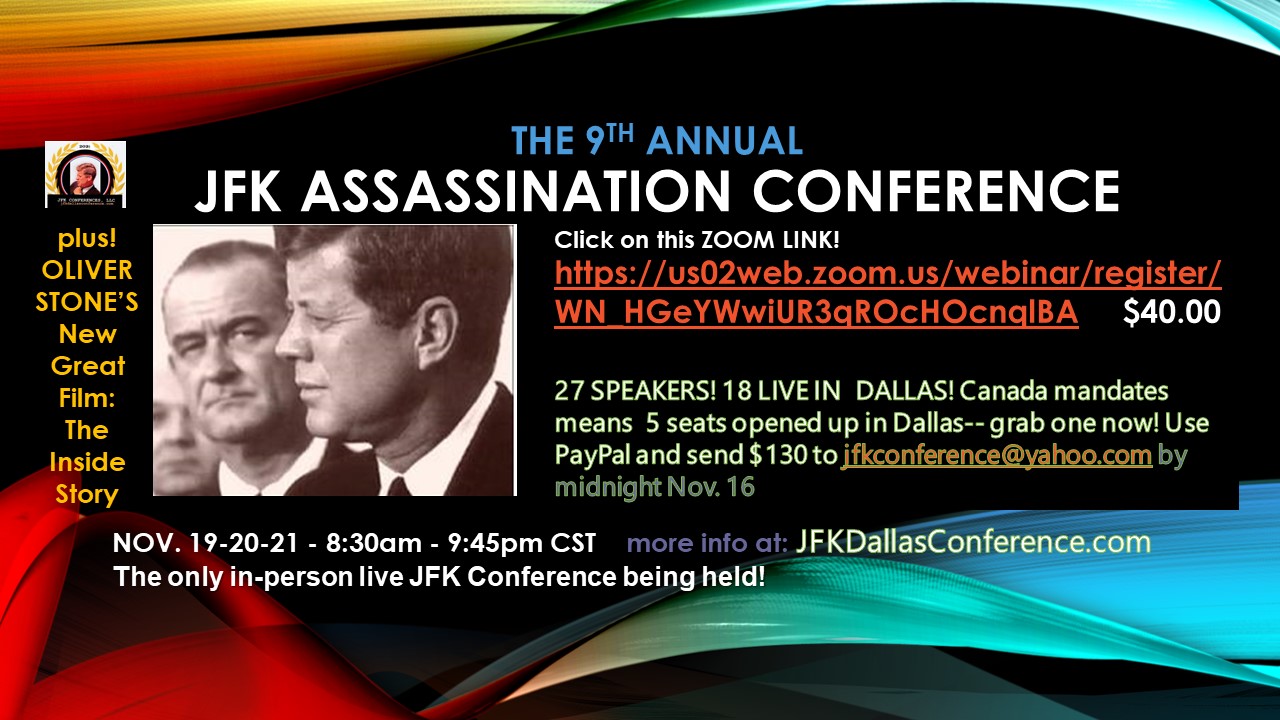 WELCOME TO OUR FUND-RAISING PAGE!

Your purchases from this page support this Conference!

You can get an autographed (JVB) first edition, first printing copy by sending $35 to JFKDallasConference@yahoo.com with your name and address; add $10 for out of USA. This is a direct purchase, and by using the conference email address, 50% of all profits go to help Judyth and other witnesses with limited income to attend the conference!)

$35 Donation  NOTE: 100% of all profits from ME & LEE go exclusively to support this Conference.

This is the book MSM refuses to mention, though it’s an underground best-seller!  This book will open your eyes to understand the sinister forces behind the Kennedy Assassination and the true character of the REAL Lee Harvey Oswald.You can get an autographed (JVB) first edition, first printing copy (hardcover) by sending $40 to JFKDallasConference@yahoo.com  with your name and address; add $10 for out of USA.

If you prefer softcover, which costs less to ship, you can pay $35 instead (add $10 extra for shipping out of country). 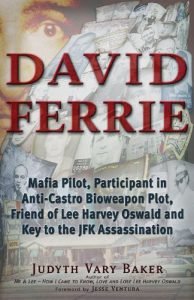 The only definitive biography of David Ferrie, a major player in the Kennedy assassination. For years, a major researcher promised a big book on Ferrie, which stopped others from publishing anything about Ferrie. However, after this book remained unpublished for 20 years, Judyth wrote David Ferrie: Mafia Pilot — 509 pages of personal memories, information and evidence revealing the truth about this fascinating and mysterious CIA asset who knew Lee Oswald well.  The book refutes the “official version” of Dave’s activities related to the Kennedy assassination. Large sections are highly personal, while other sections are written in a scholarly manner suitable for researchers, theses and dissertations. FOR YOUR AUTOGRAPHED COPY, GO TO PAYPAL AND SEND YOUR PAYMENT OF $35 to:  judythvarybaker@gmail.com.

All the above books may be ordered from Amazon, Trine Day Books, or Barnes & Noble.

These are direct purchases, meaning all profits from  sales of ME & LEE go to pay conference expenses. 100% of all JVB’s royalties from sales of ME & Lee from all other sources, such as Trine Day, Barnes & Noble, Amazon, etc. go to help support the Conference.  In addition, 100% of  net income raised at this bookstore from ME & LEE sales helps the JFK Assassination Conference. [Sales at Judyth’s table at the Conference itself help cover some of her travel, hotel and meal expenses].

More reasons why these books are important:

NEW FILES RELEASED VERIFY VARIOUS EVENTS REVEALED IN ME & LEE IN 2010 OR EARLIER!

1) Big shipments of rifles from Caracas, coming in by boat, to distribute to anti-Castro insurgents; The book Me & Lee also mentions that part of the shipment coming to New Orleans was marked as belonging to Cuba, to use to implicate Castro: a new secret file release — DOC ID 104-10290-10026 -shows a ‘boat” left a big cache of rifles, along with machines guns, marked as from Cuba,  on an abandoned beach in Venezuela, which the Venezuelan government conveniently “discovered” before “rebels” could pick it up, though the cache had been there several days, as locals reported. We are supposed to believe that the government ‘somehow’ found the cache first.

2) Re Jack Ruby: Me & Lee explained Ruby was important in Los Vegas, according to stripper I met there, and was not just a nearly-bankrupt strip club owner in Dallas. New secret file release in July, 2017 showed Ruby was an honored guest at Tropicana Hotel in Los Vegas, where he registered as “Mr. & Mrs. Ruben” and was given the hotel’s Rolls-Royce to drive around town, only a week before the Kennedy assassination.

Because of what we showed Jack Ruby in New Orleans, he was aware that cancer cells were being developed under a CIA-sponsored long-term project for injection, as a biological weapon, to “kill without any blame to the USA.”  Ruby would insist, close to his death, that he had been injected with cancer cells.  New secret files released late in 2017 show Ruby had inside knowledge about the Kennedy assassination, being close enough to the plotters of the Kennedy assassination that he advised a friend to stick around in Dealey Plaza with him to “watch the fireworks” only minutes before JFK was shot.  This fore-knowledge means Ruby was close to both Lee Oswald and to the true killers. Evidence keeps accumulating that suggests Ruby acted as a traitor.

3.  Lee Oswald’s history in Mexico City was entirely rewritten into a huge stack of “chrono dummy” files to replace the truth; what really happened to Lee in Mexico City is in Me & Lee. Here is an example of such a file, which is clearly labeled as a dummy (fake) file, to be handed over to the Warren Commission. (In Me & Lee you already knew it, since Lee told me an entire room of typists was busy rewriting everything for 1963 in the CIA records — weeks before the assassination. ME & LEE connects the dots– from the mystery of why Lee Oswald, Clay Shaw and David Ferrie were seen together in Clinton, Louisiana, to how Lee made it seem he never went to Mexico City at all, by creating “sightings’ of himself in several cities just before traveling to Mexico City. Much of what was revealed in Me & LEE has been included in this compilation of the faces, facts and events that led to the Kennedy assassination and its necessary cover-up.  A special section on “Nixon’s Lies” shows the general way the cover-up was conducted;  others who knew JFK was going to die that day used false witnesses willing to provide them alibis.  From secret societies to the military-industrial complex, to how the Paines were involved in framing Lee Oswald, the important information you need to understand what happened to America in 1963 is in KENNEDY & OSWALD: THE BIG PICTURE.   Also available on Amazon, at Trine Day Books, and Barnes & Noble (by order). 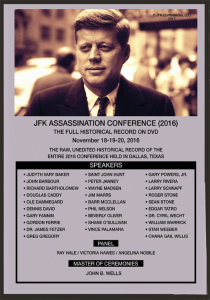 Your purchase helps support this Conference!

To ORDER ANY OF THE ABOVE DVD COLLECTIONS, use either PayPal (fastest way) or Money Order (may be some delay)

1. BY PAYPAL:  Go to Paypal.com and send your payment to jfkconference@yahoo.com

2. BY MONEY ORDER: Fill out money order to “JFK Conferences, LLC” and send to:

If you do not receive your book/DVD set in a reasonable time, please write to jfkconference@yahoo.com and we will reply!

==WE DON’T GET SUPPORT FROM THE BAD GUYS, SO THANK YOU FOR HELPING THIS GREAT, INDEPENDENT CONFERENCE TO REACH THE PEOPLE WITH THE HIGHEST QUALITY SPEAKERS AND WITNESSES, AT THE LOWEST TICKET PRICE POSSIBLE!==

An error has occured.