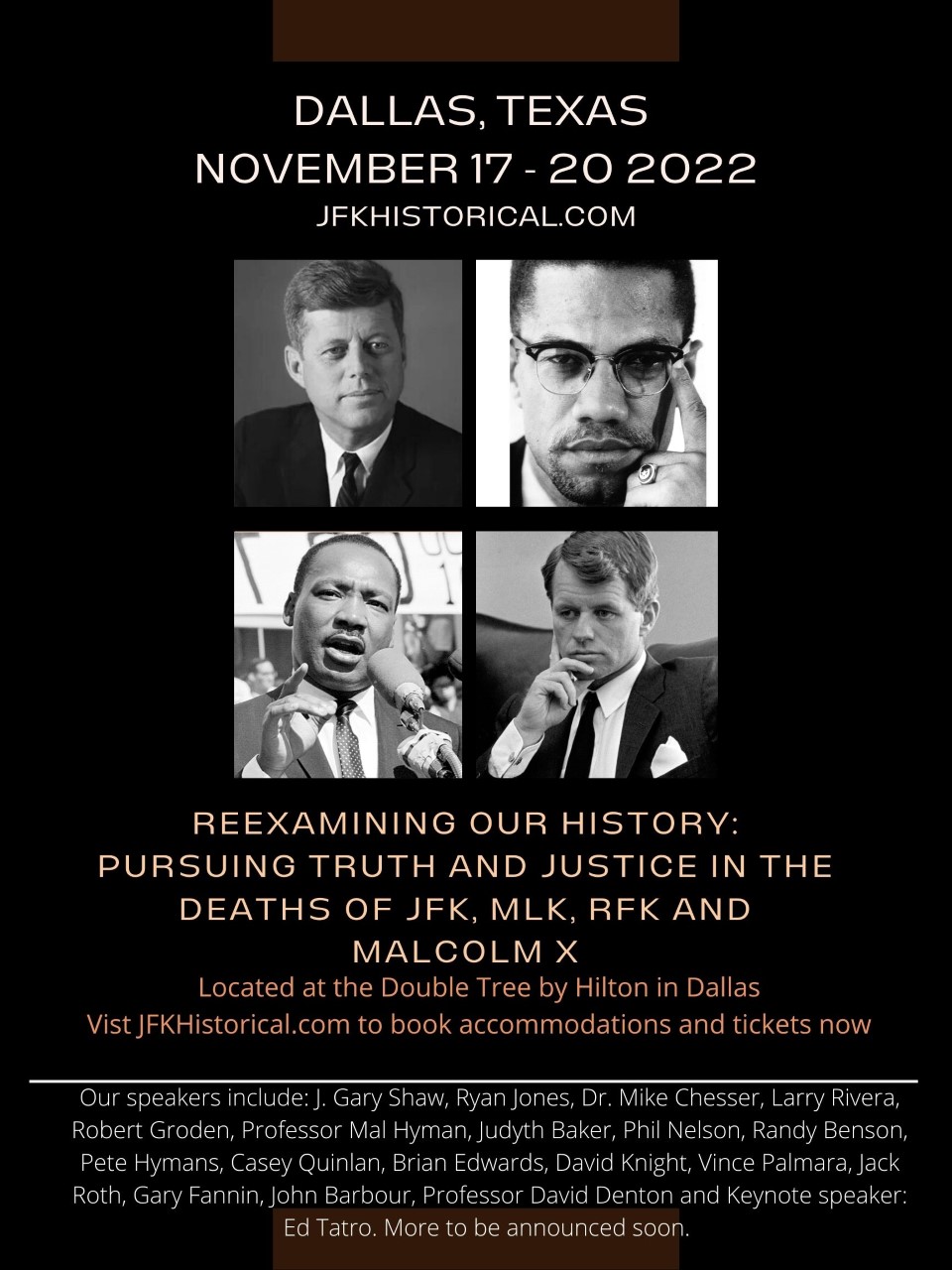 Here is the list you’ve asked me for! 50 of the best books about the Kennedy assassination. The key to what happened to America, and who was responsible, begins by reading the truth that was hidden from you. These books expose the chicanery of the Deep State’s Official Version with honest witnesses, verified documents and accurate information. Why are vital records still kept secret “for national security reasons” if Oswald acted alone? In 2017, the files that were released were mostly STILL censored, which was illegal and in defiance of the JFK Act and the ARRB Committee’s directives. With many books receiving praise and attention from the media, it’s stunning how the BEST books — with unwanted facts –are buried by search engines online, even though they are best-sellers. “My book — Me & Lee” says Judyth Baker, “has gone through five printings, and is a best-seller, with almost 800 reviews and a 4.7 star rating on Amazon, but if you don’t know the name of my book, you’ll never know it exists.” The books listed here have been reviewed and recommended by thousands of readers on Judyth Vary Baker’s Facebook and Assassination Conference pages over a period of 22 years. . Each one has a convenient link to Amazon. You won’t be disappointed!

HERE ARE THE 50 BEST, MOST HONEST BOOKS ABOUT THE KENNEDY ASSASSINATION. CLICK ON THE URL to go to Amazon, where you can read more. Descriptions will continue to be added… Get yours before they’re gone. (I will try to keep the list updated for you.)

To purchase, go to this link at Amazon.com:
https://amzn.to/3QLCzbj

To purchase, go to this link at Amazon.com:
https://amzn.to/3Bu534H

To purchase, go to this link at Amazon.com:
https://amzn.to/3RtroVE

To purchase, go to this link at Amazon.com:
https://amzn.to/3xbjVlY

To purchase, go to this link at Amazon.com:
https://amzn.to/3Dm1oHo

8. LBJ: The Mastermind of the JFK Assassination ——-

9. Brothers ——Gut-wrenchung masterpiece telling us what America and the world lost when these brothers were assassinated in cold blood.

10. Hit List — Largely accurate, honest and intriguing. Should be purchased along with Richard Charnin’s “Reclaiming Science” (above) to
have the complete picture of over 160 murders of witnesses and officials to keep the coverup and the official version of things in place.

11. David Ferrie: Mafia Pilot … Key to the JFK Assassination: The first book ever written about David Ferrie (the mysterious main character in the film “JFK,” in “Dr. Mary’s Monkey” and in “Me & Lee”), I knew Dave personally. Who he really was will astonish you.

12. Rush to Judgement : the Classic — Important because the backbone of this book was written mere days after the Kennedy assassination. The Guardian published this fine attorney’s first essays, showing rigged evidence, false witnesses, and Oswald’s being denied legal assistance.)

13. Survivor’s Guilt —(Authenticated. I know Vince, and he truly is a world expert on JFK’s Secret Service. Palamara’s first book scorches the SS. He interviewed and taped almost every SS agent assigned to JFK early on, and when they later lied, out came the tapes and photos! The title says it all. )

14. They Killed Our President —-(You’ll win every debate with this one. Gateway to understanding how important JFK’s assassination was, and how the people were fooled. I met Gov. Ventura several times. He questioned me in both Chicago and in Dallas and we appeared together a few times on TV and at a press conference. )

15. The Innocence of Oswald —-(Authenticated. Truthful and honest, easy reading, should be in every library!)

16. Mary’s Mosaic —–(The cover says it all about this best-seller. JFK’s longtime mistress held too many secrets for her own good. An innocent black man was framed to hide the real assassins…)

17. The Echo from Dealey Plaza —(Bolden, the first black Secret Service agent to be on JFK’s protection team, The Kennedy Detail, was framed and imprisoned for exposing their prejudice against blacks and their laxity and corruption that guaranteed JFK would not leave Dallas alive. I have met this good man, who was finally pardoned in 2022. He deserves a medal.)

18. Burying the Lead —-(How the truth was turned into lies, overnight, beginning with the first moments after the Kennedy assassination. The book will make you angry because the cover-up by the media is still going on today. BE INFORMED through this book.)

19. The Girl on the Stairs —–(Best evidence that Lee Oswald never fired a shot. Two girls were on the stairs. The one girl interviewed by the Warren Commission learned years later that they altered her testimony to make sure she could not be used to clear Lee Oswald. Well-documented.)

To purchase, go to this link at Amazon.com:
https://amzn.to/3L5E3M8

20. The Secret Team –—-(You can trust Prouty for a big part of the big picture from the military standpoint. We had a brief correspondence just before his death. He encouraged me to speak out.)–

21. The Man Who Killed Kennedy —(Stone is a witness who was deeply involved with the whole machinery set up to bring LBJ into power and to insert Roger’s hero, Richard
Nixon, into the Presidency next. We can learn a great deal about LBJ and the assassination from the Master of Political Dirty Tricks. I have met and spoken to Roger Stone several times.)

22. Blood, Money and Power –—(Authenticated after several personal meetings with this sincere attorney who came too close to the smoking guns, so was attacked viciously by the media.)

23. The Deputy Interviews —-(authenticated: learn about honest Dallas Officer Roger Craig and his tragic saga as a witness dangerous to the CIA, the corrupt conduct of the police, and the assassins.)

24. Double Cross —-(David Ferrie was close enough to the Mafia to tell me a lot, and this book reflects Mafia culture, omerta, the corruption of the FBI, the death of Marilyn Monroe, JFK and the assassination.)

25. Coup in Dallas — (Authenticated. Deep research and new evidence that media doesn’t want you to know, concerning Oswald in Mexico City and who really killed JFK . Had some interactions with this sincere, now-deceased author as he began research on this, his last book.)

26. On the Trail of the Assassins —-(More right than wrong. Did what he could under the nose of the dangerous Mob Boss, Carlos Marcello, and dealing with corrupt media and government harassment: his priceless evidence in New Orleans corroborates Haslam’s and mine.)

27. Trauma Room One — (Met Dr. Crenshaw, who was treated horribly for telling the truth. Witnesses now back him up. Saw exit hole in back of JFK’s head, refused to back down under pressure to change his story about that or the entrance wound in JFK’s neck. Hero.)

28. JFK Revisited: Through the Looking Glass Hardcover (the book of the 2022 documentary by Oliver Stone & Jim DiEugenio (built upon the successor to the seminal film “JFK”)

To purchase, go to this link at Amazon.com:
https://amzn.to/3SVww

29. At the Cold Shoulder of History-– (I have met the author and the priceless witness – among several- who still survives, who broke a gag order to tell us that he was at JFK’s autopsy , which was crude and botched, on the President’s body with altered head wounds …I interviewed Dennis David and Hubert Clark (both now dead) who authenticated his story, as did researcher Phil Singer, Secret Service Agents and others.)

To purchase, go to this link at Amazon.com:
https://amzn.to/3QzQkJV

31. Into the Nightmare-– (Well-written and well-researched, exonerates Lee Oswald, is accurate and quotable.)

32. Bond of Secrecy —(written by the son of the CIA’s super-spy who named JFK’s assassins in “The Big Event”:–I have known Saint John Hunt almost a decade and found him a sincere witness.)

33. On the Trail of the JFK Assassins — (Renowned for “The Man Who Knew Too Much”- this is the long-awaited update by an honest researcher.)

34. The JFK Assassination Dissected — (By America’s first great pathologist who dared called CE133 ‘THE MAGIC BULLET’ – and he was right.)

35. The Reporter Who Knew Too Much –[Dorothy Kilgallen] (A staged accident/suicide that was the murder of the only reporter to get a private interview with Jack Ruby)

36. Not in Your Lifetime — (Very good, but Summers changed his mind about the Tippit murder in 2013, discounting new2aqnde old facts that prove Oswald could not have been at the murder scene, lowering the value of his book.)

37. A Certain Arrogance — (The strange, the weird, the unexplained… where Mind Control experiments and the homosexual underground used religion and blackmail to hide covert activity and assassinations.)

38. Inside the ARRB (5-volume set, try Vol. IV first!) —(genuine and honest ARRB member who I have corresponded with gives us 5 volumes of historic witness testimony and analysis)

39. The Last Investigation —(honest HSCA investigator and witness helped expose CIA’s David Atlee Phillips and shows us how this last government investigation failed our country and denied justice to JFK. )

–To purchase, go to this link at Amazon.com:
https://amzn.to/3xhOSF7

41. LBJ and the Kennedy Killing— (Authenticated: I met with James Tague before his death)

To purchase, go to this link at Amazon.com:
https://amzn.to/3RInkkI

42. Trained to Kill —(CIA disavows, but we who knew anti-Castroites knew this man meant business in the 1960’s)

43. From an Office Building with a High-Powered Rifle
(Authenticated: I met with FBI agent Don Adams before he tragically died after a fire)

45. Kennedy and Oswald: the Big Picture (raw manuscript, uncensored, this is my book, with Edward Schwartz – JFK’s enemies are all here.)

46. The Hidden History of the JFK Assassination (Waldron is respected.)

To purchase, go to this link at Amazon.com:
https://amzn.to/3RCIyQQ

Accessories After the Fact: (Early researcher with earliest records and facts)

To purchase, go to this link at Amazon.com:
https://amzn.to/3BakHB1

FOR JFK CONFERENCE INFORMATION AND HISTORIC CONFERENCE PRESENTATIONS ON DVDS, GO TO HTTPS://WWW.JFKDALLASCONFERENCE.COM or write to JFKConferences@gmail.com.

Judyth Vary Baker, a witness and author of three of the 50 books on this list, has selected these books as the best currently available about the Kennedy assassination (a few are only on Kindle). Experts, witnesses and concerned truth-seekers understand that we were lied to. Since records continue to be withheld “for national security reasons” nearly sixty years later, and those that are released continue to be censored, clearly the truth is being hidden from us. Many books are out there –often paid for by the CIA– that can make it hard to find the truth. Suggestion: select a book from the top twelve, and at least one other book that appeals to you personally. Click on the link to get your book on Amazon or directly from Judyth. It’s better to own three good books that reveal what really happened than to read a hundred books that push the obsolete “Lone Nut” theory. Remember, “conspiracy theorist” is a term invented by the CIA. We have the right to know the truth, and this is one way to find it.
“The Big Event” changed our country forever. “A whole new government” was formed, as Jack Ruby told us, when he said that persons in high places forced him to kill the so-called assassin, Lee H. Oswald. Oswald was declared the ONLY person involved in Kennedy’s assassination by FBI Director J. Edgar Hoover THE SAME DAY Kennedy was shot. The Warren Commission looked ONLY at Lee Oswald — nobody else–as per their instructions.
Everyone is safer if we learn how we have been manipulated, lied to, and fooled. “Cherish truth”and share your books. For most, only two good, solid, honest books are needed to open the doors and let in the light. And here they are!

(CERTAIN CONTENT THAT APPEARS ON THIS SITE COMES FROM AMAZON. THIS CONTENT IS PROVIDED ‘AS IS’ AND IS SUBJECT TO CHANGE OR REMOVAL AT ANY TIME.
This site is a participant in the Amazon Services LLC Associates Program, an affiliate advertising program designed to provide a means for sites to earn advertising fees by advertising and linking to Amazon.com. We are compensated for referring traffic and business to Amazon). The good news is connecting this site to Amazon gives me the means to provide this list to YOU, knowing the list will NOT be buried by search engines, since Amazon has power I do not have! – jvb

An error has occured.